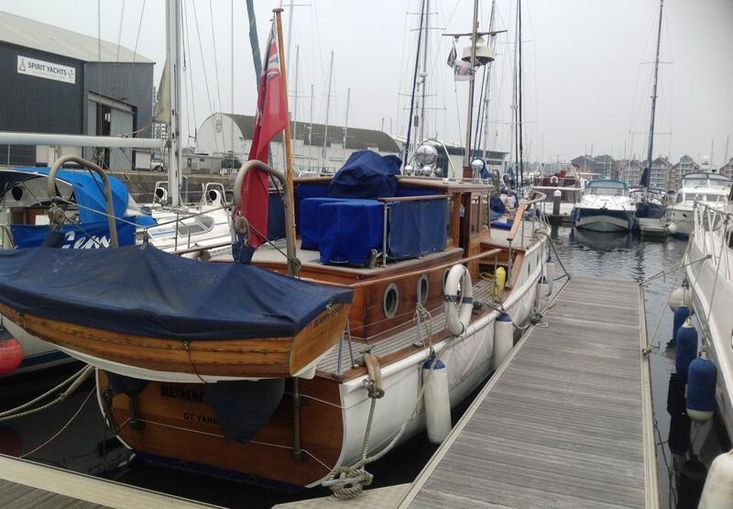 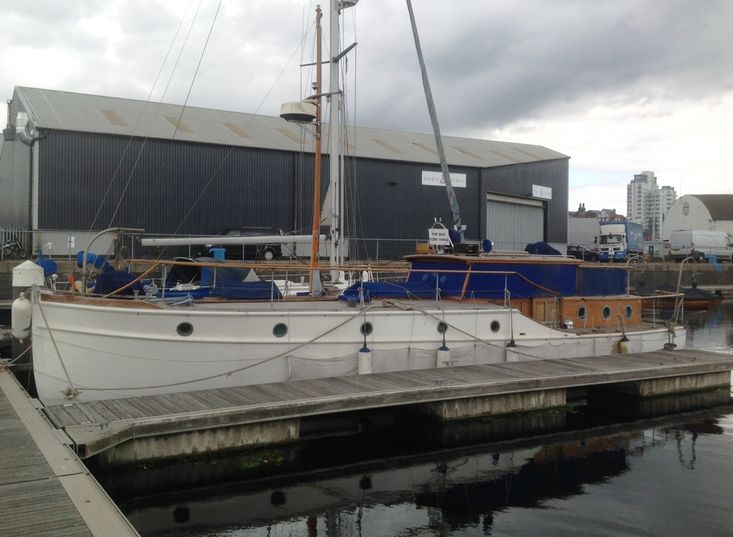 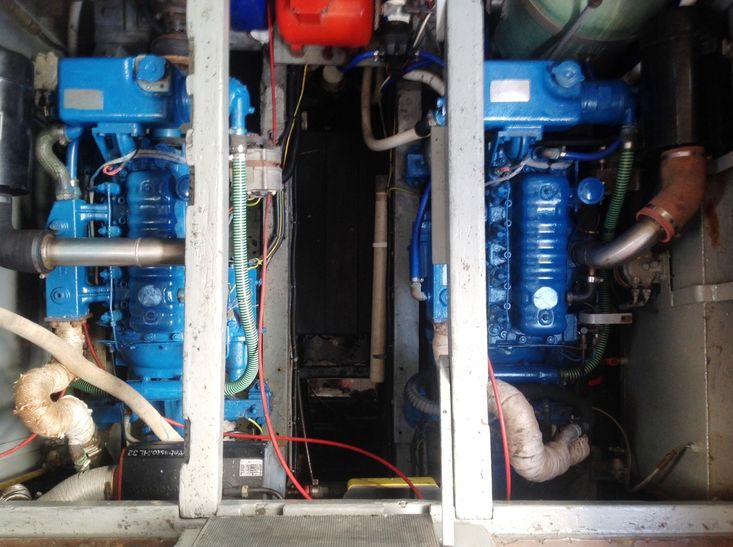 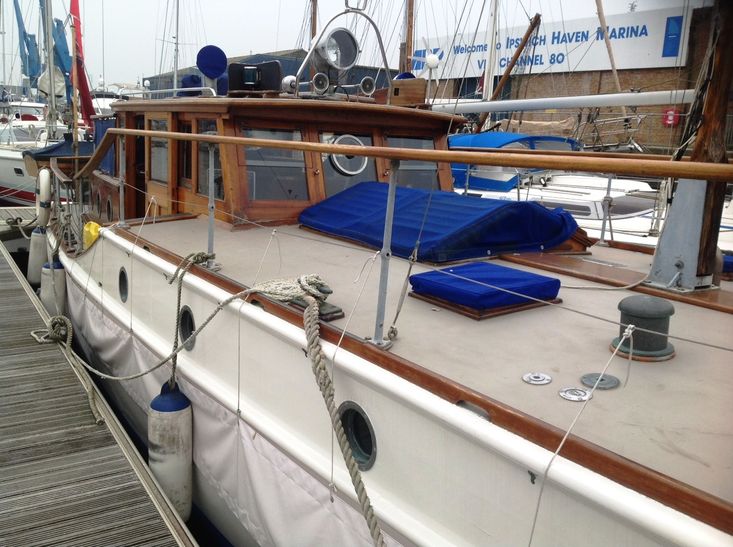 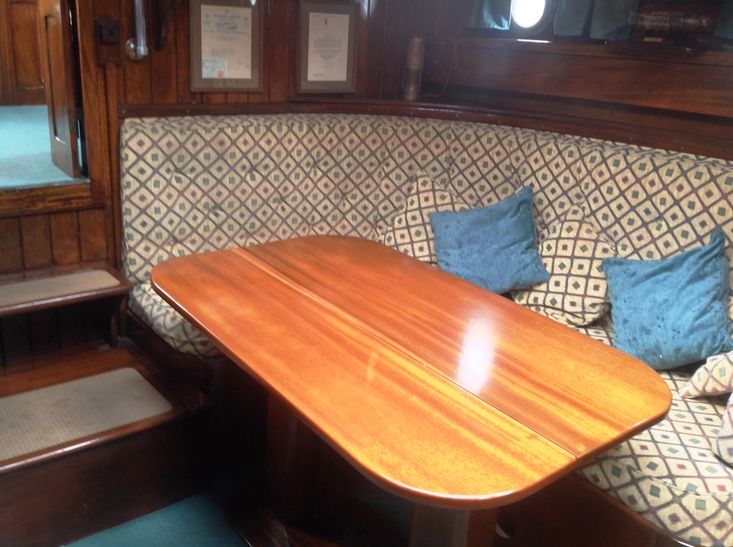 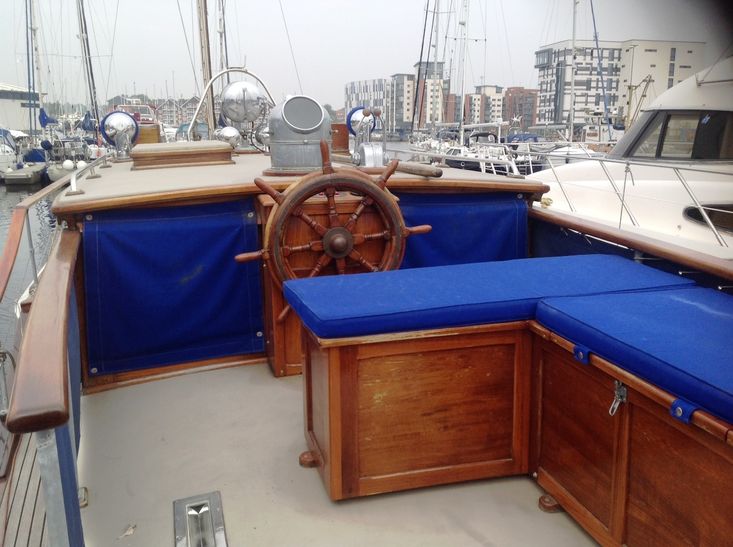 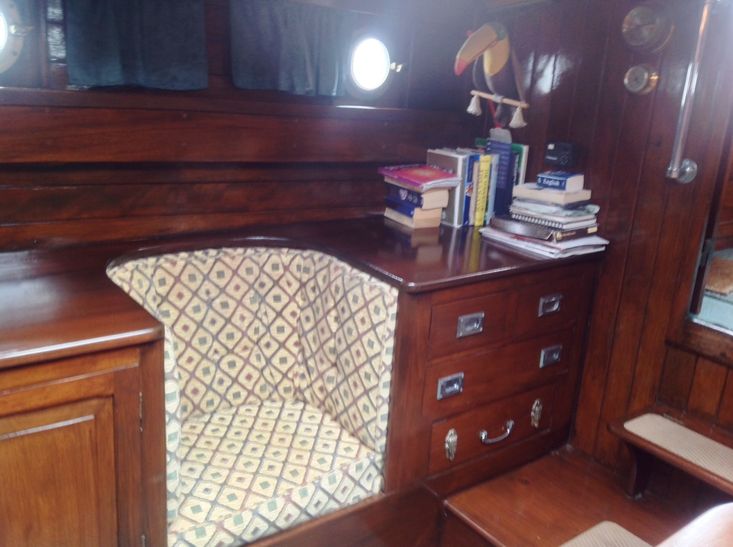 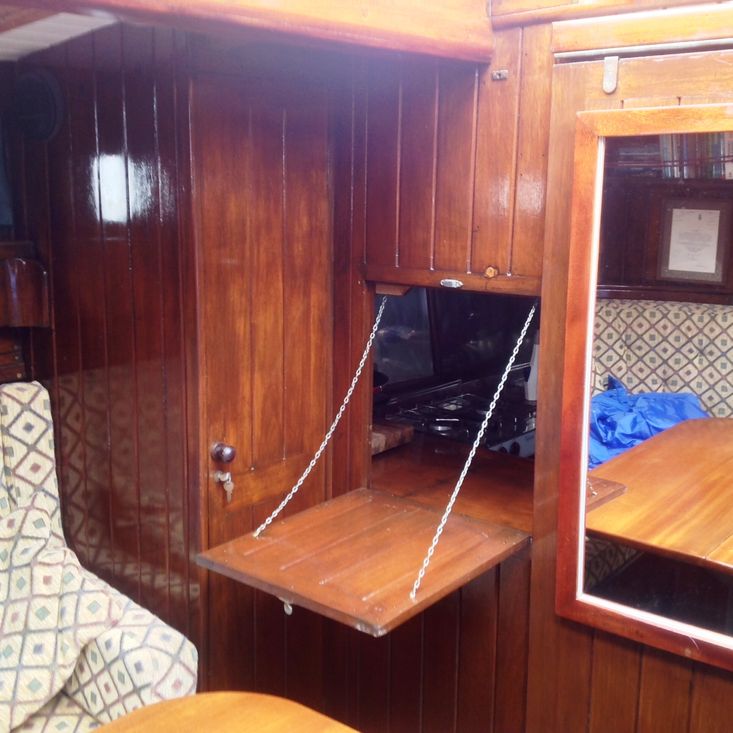 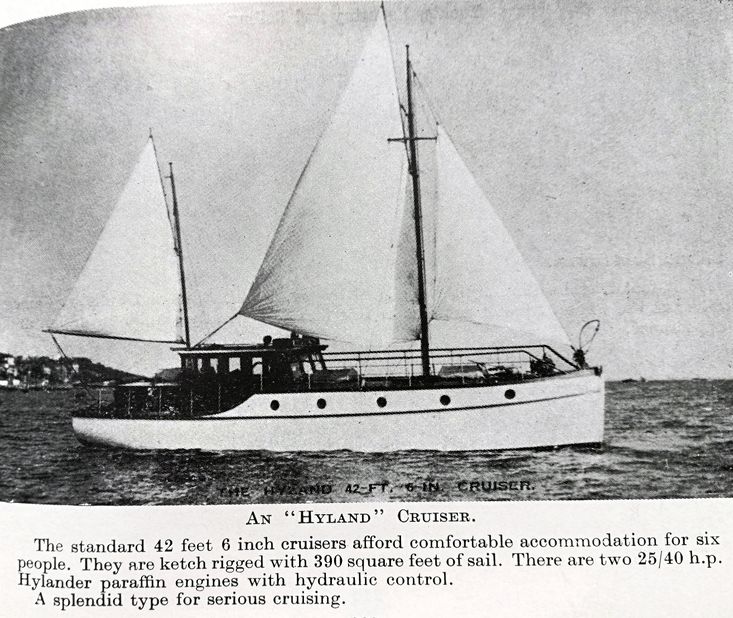 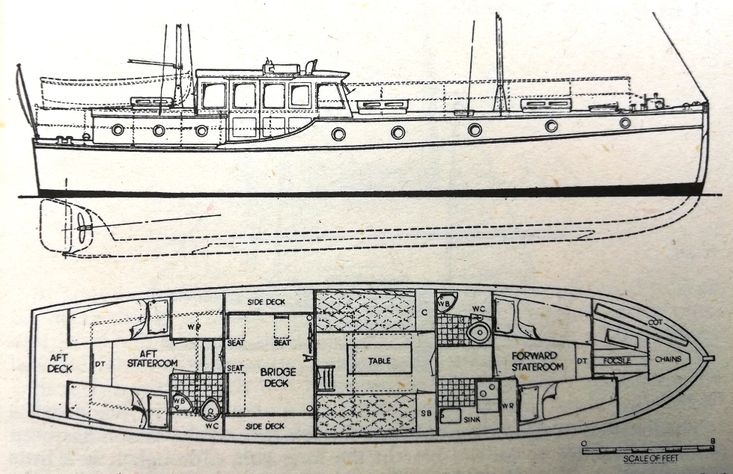 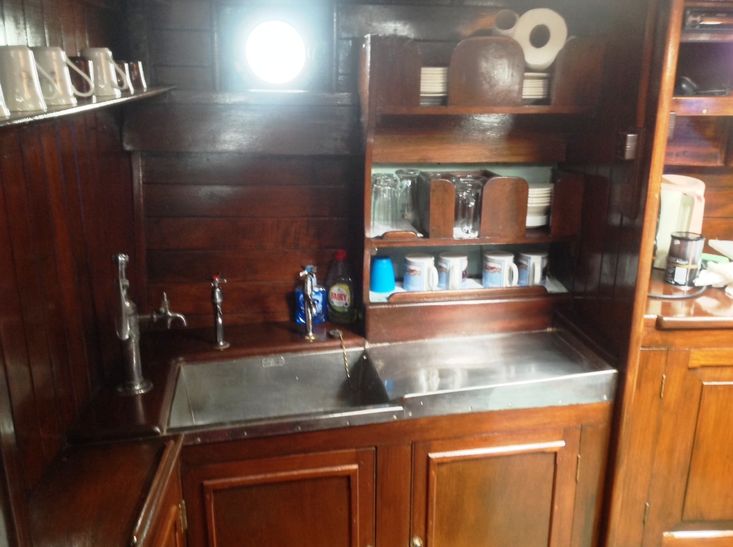 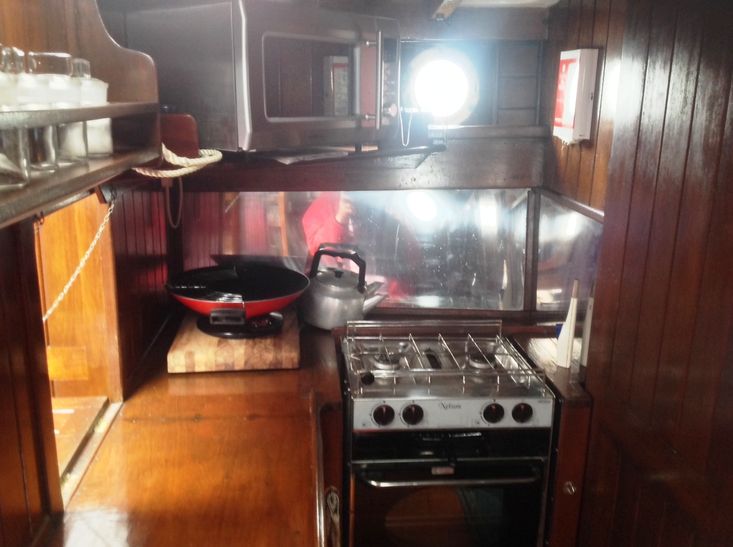 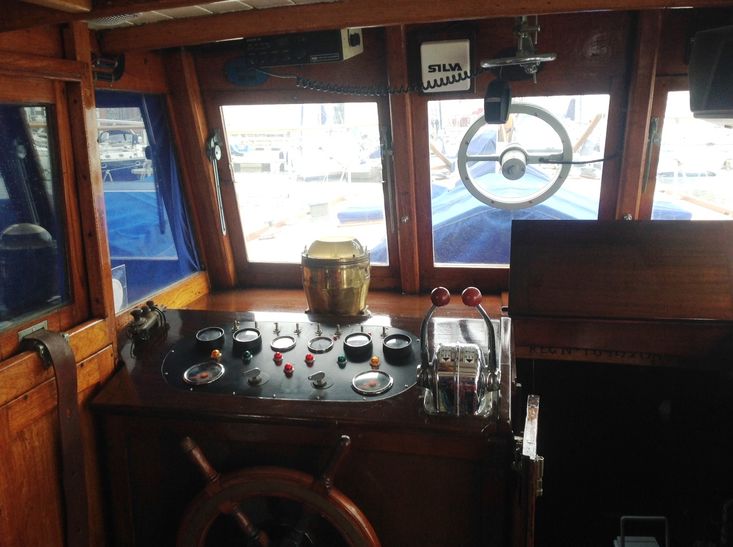 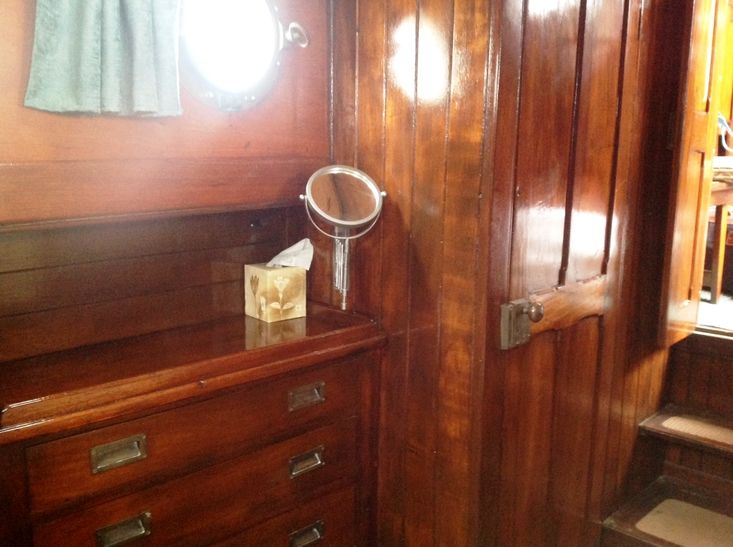 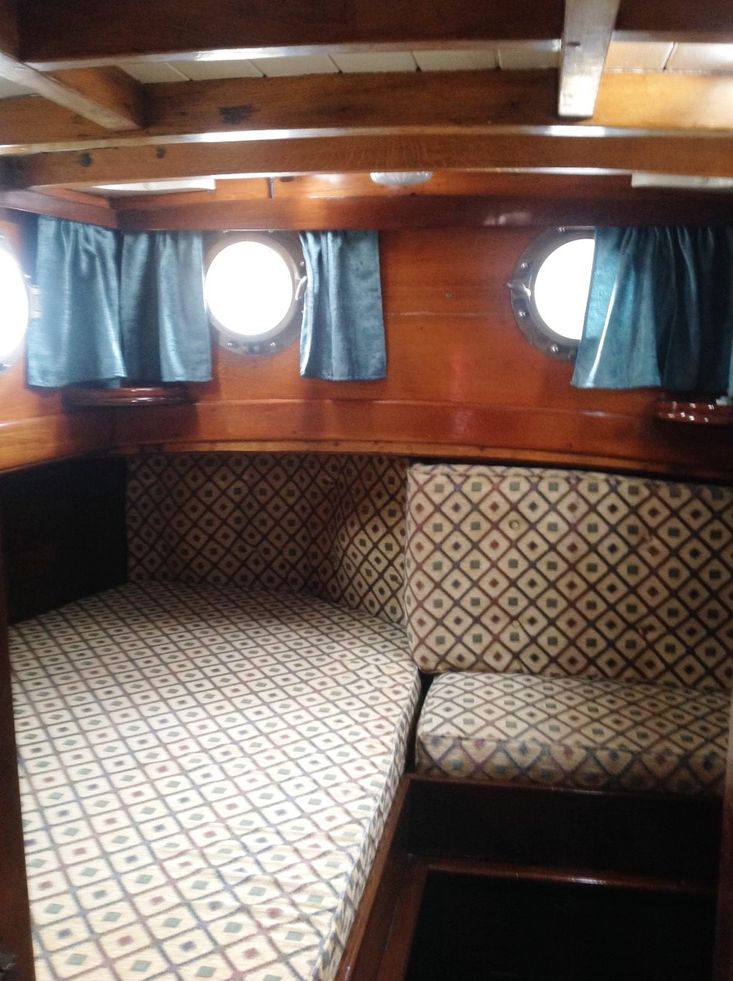 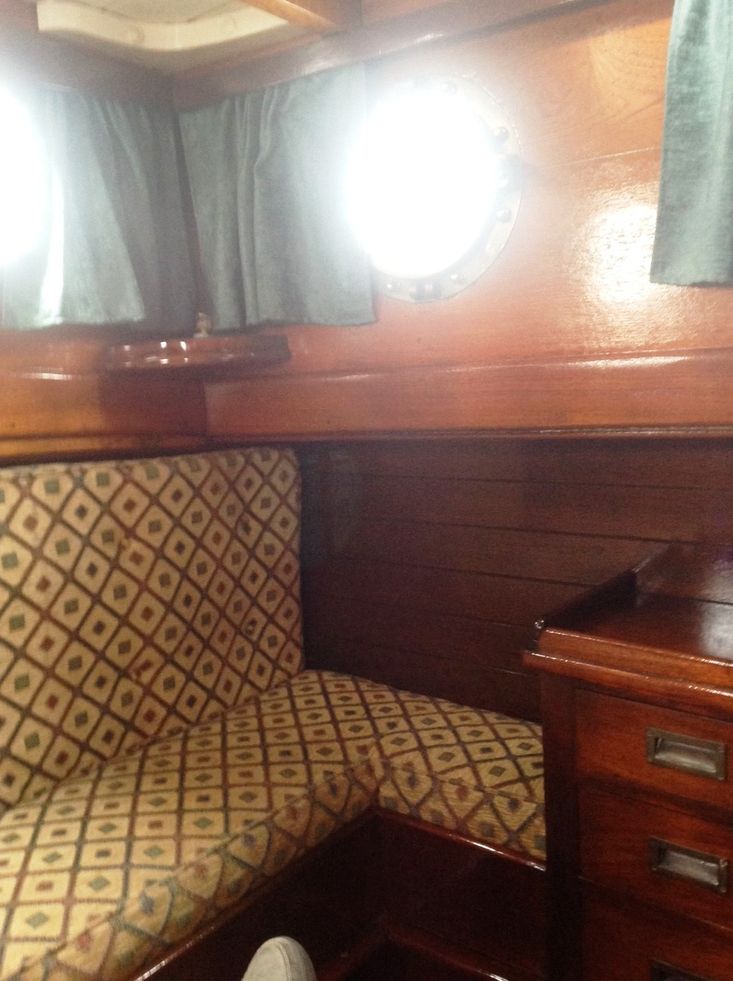 HISTORY & DESCRIPTION:
In 1935 Geoffrey Livingston of the Hollies, Leicester commissioned Arthur Comben of Hyland Ltd to refine his design of a 42ft sea-going motor yacht to be kept on the East Coast. Staniland of Thorne built the vessel for the sum of £2,050 of pitch-pine on oak with teak superstructure and brightwork. Interestingly Geoff had RUMMY 11 built in 1930 by Bangor Shipyard, to a Hyland 30ft motor yacht design. Hyland Cruisers have an established reputation and were built to order in the 36ft, 38ft and 42ft class with a small number of 40 footers. The 42ft Hylands were ketch rigged with 390 sq.ft plain sail. They were much featured in yachting Magazines of the time and sailing books to include Yachts, Yachting & Sailing by Talbot Booth.
She was requisitioned by the War Office on 22nd June 1940 for the use of Resident Naval Officer Boston and released on 1st December 1941. However, she went back into service on 20th July 1942 as a fire float for the coastal forces unit at Great Yarmouth. She was then acquired by the Ministry of War Transport Department on 3rd October 1942. She was re-named HMS FLYCATCHER and became the nominal depot ship of the Royal Naval Station at Ludham, Norfolk. On 14th July 1945, she was laid up at Sanderson’s Boat Yard at Reedham and in October 1945, she was sold out of service and re-built by Herbert Woods in Norfolk. Geoffrey Livingston, a member of the Royal Harwich Y C and Royal Motor Y C continued to own RUMMY 111 after the war until 1957 when he sold her to Harold Bastie of Highgate London. In about 1970 Harold sold the boat to S Cunningham who moved her to Woodbridge Quay in Suffolk. In the mid-1970s George Durrant of Harleston, Norfolk became RUMMY 111’s third registered owner continuing to keep her on the East Coast. George owned the boat until around 1990 when she was bought by the current owners and based in Ipswich. The fact RUMMY 111 has only had five cherished owners in eight-five years is testament to the desirability and excellent design of this period classic motor-yacht.

Carvel 1 inch pitch-pine planked, all copper fastened to steam bent timbers. Oak centre-line, keel and deck beams. Epoxy sheathed fore-deck, teak-laid side and stern deck. Solid teak superstructure, skylights and brightwork. In 2001 Harbour Marine Services carried out a thorough re-fit costing in total £160,000. Work completed included a new apron, transom, beam shelves and deck. The engines were refurbished and the port engine totally re-built, the boat fully re-wired to the latest regulations and also the gas system, new plumbing and overhaul of the diesel heating system. Complete fire protection system with automatic units in the engine room. The interior was stripped back and sympathetically refurbished to retain the original appearance. Since the major re-fit RUMMY 111 has been maintained to a high standard throughout and is professionally re-painted by Watercraft every few years and retains all her original period style and classic appeal.

SALOON: with upholstered settee to portside with central cabin table. Fitted sideboard with drawers and cupboards to starboard having feature upholstered captains seat. Drinks cabinet and drop-leaf serving hatch to the galley. Opening skylight and portlights.

AFT STATEROOM: with double berth having Vi-Sprung mattress, upholstered settee to the port side and fitted dressing table with drawers. ENSUITE HEADS/SHOWER with marine WC, washbasin and shower. Starboard side hanging locker/wardrobe.

An extremely rare opportunity to acquire one of only a small number of the 42ft Hyland Class built during the 1930s, the cost at the time of a good-sized country house. A proven coastal cruiser or ideal for inland waterways. A real classic gem retaining all the elegance and appeal of the period yet as practical and capable as when first built. Registered National Historic Ships.

Important Note: The particulars / images of the vessels listed on this website are believed to be accurate but are not guaranteed, buyers should satisfy themselves regarding the same. No warranty is given as to the condition of vessel's hull, machinery and equipment / gear and an examination by a qualified marine surveyor is always recommended.